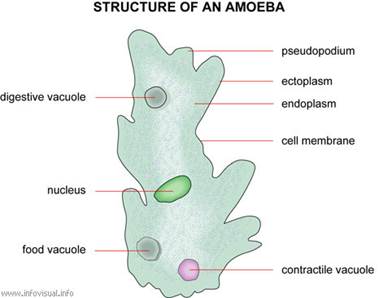 The amoeba is a tiny, one-celled organism. You need a microscope to see most amoebas – the largest are only about 1 mm across. Amoebas live in fresh water (like puddle and ponds), in salt water, in wet soil, and in animals (including people). There are many different types of amoebas. The name amoeba comes from the Greek word amoibe, which means change. (Amoeba is sometimes spelled ameba.)

cell membrane – the thin layer of protein and fat that surrounds the amoeba; it allows some substances to pass into the cell, and blocks other substances.
contractile vacuole – a cavity within the amoeba that excretes excess water and waste; the waste is brought to the cell membrane and is then eliminated from the amoeba.
cytoplasm (ectoplasm and endoplasm) – a jelly-like material that fills most of the cell; the organelles (like the nucleus) are surrounded by cytoplasm.
food vacuole – a cavity within the amoeba in which food is digested (broken down in order to be absorbed by the amoeba).
nucleus – the major organelle of the amoeba, located centrally; it controls reproduction (it contains the chromosomes) and many other important functions (including eating and growth).
pseudopods – temporary “feet” that the amoeba uses to move around and to engulf food.

An amoeba consists of a single blobby cell surrounded by a porous cell membrane. The amoeba “breathes” using this membrane – oxygen gas from the water passes in to the amoeba through the cell membrane and carbon dioxide gas leaves through it. A complex, jelly-like series of folded membranes called cytoplasm fills most of the cell. A large, disk-shaped nucleus within the amoeba controls the growth and reproduction of the amoeba.

Amoebas eat algae, bacteria, plant cells, and microscopic protozoa and metazoa – some amoebas are parasites. They eat by surrounding tiny particles of food with pseudopods, forming a bubble-like food vacuole. The food vacuole digests the food. Wastes and excess water are transported outside the cell by contractile vacuoles. 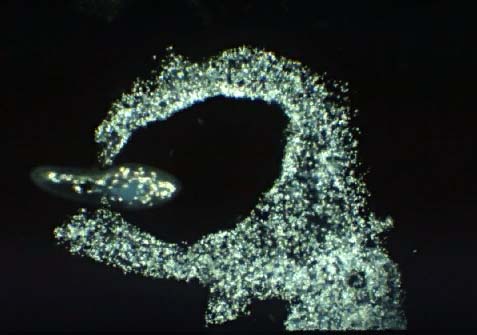 An amoeba, a single-celled organism lacking internal organs, is shown approaching a much smaller paramecium, which it begins to engulf with large outflowings of its cytoplasm, called pseudopodia. Once the paramecium is completely engulfed, a primitive digestive cavity, called a vacuole, forms around it. In the vacuole, acids break the paramecium down into chemicals that the amoeba can diffuse back into its cytoplasm for nourishment. 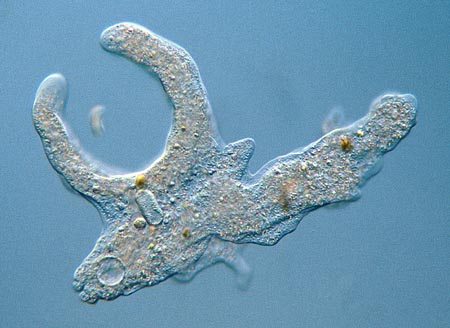 Amoeba proteus is busy capturing a ciliate by surrounding it with its pseudopodia. The nucleus can be seen just below the pseudopodia. Bottom left is a water expelling contractile vacuole.

The amoeba heads toward the paramecium. It begins to spread out it’s body to catch its prey. The amoeba will absorb its lunch completely inside the amoeba!

We thank our friends at NoDepositPromoCodes for supporting the LeavingBio website!