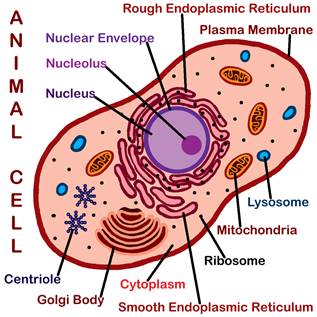 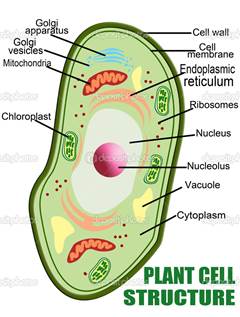 All living organisms are made up of cells and new cells are produced when live cells divide. The cell is the smallest unit of life in an organism. The cell lives and, as a result, the organism lives. Whatever an organism does for survival it does for the survival of its cells.

Below is a diagram of a compound light microscope. Learn the various parts. You will be using the microscope in your biology study.

Diagram of a Microscope 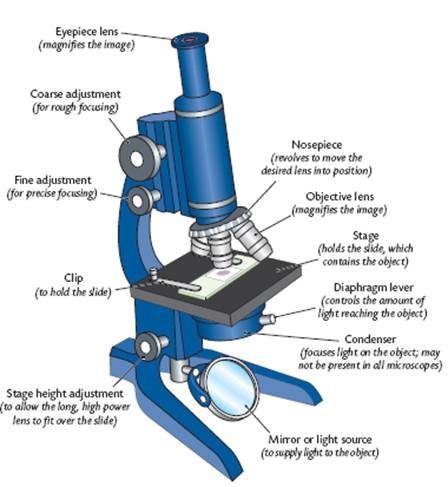 In 1665 Robert Hooke used a light microscope to study cork. He noticed that the cork was composed of many small boxes. He named the compartment cells because they reminded him of prison cells.

It is now known that all living things are composed of cells. They are measured using the unit micrometer. The symbol for micrometer is m. A m is one thousandth of a millimetre.

The diagram below is an animal as may be seen using a light microscope. All the living matter of a cell is called protoplasm. The cell is surrounded by a cell or plasma membrane. The nucleus is the control centre of the cell. The cytoplasm surrounds the nucleus. The cytoplasm is everything within the cell except for the nucleus. There are many small organelles within the cytoplasm. This is where most of the cell s activities take place. The cytoplasm is composed of 90% water. They cannot be seen using a light microscope. They will be discussed later.

The diagram below is a plant cell as may be seen using a light microscope. All the living matter of a plant cell is also called protoplasm. The cell is surrounded by a cell or plasma membrane. Unlike the animal cell the plant cell also has a cell wall surrounding it. This is made of cellulose and is very rigid. It supports the plant cell. The nucleus is the control centre of the cell. The cytoplasm surrounds the nucleus. The vacuole is a storage area for the plant cell. The vacuole contains cell sap. This is made of sugars, salts, and pigments. The chloroplasts contain chlorophyll. This is where photosynthesis occurs within the cell. 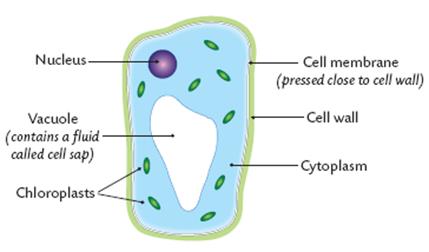 The Ultrastructure of Cells 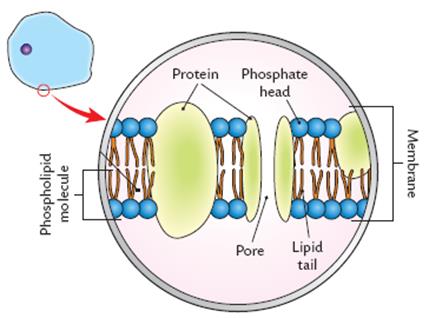 The membranes allow some materials to enter the cell but not all materials. Thus, the membrane is said to be semipermeable. Water, oxygen and carbon dioxide freely pass through it, many other chemicals cannot. Another term used for this aspect of the membrane is selectively permeable.

The membrane keeps cell contents together allowing efficient coordination of its activity. It helps the cell keep its contents.

Give support to the cell.

Recognise (sense) molecules that touch them.

The nucleus is the control centre of the cell. It is surrounded by a nuclear membrane that allows molecules to enter and leave the nucleus similar to the plasma membrane.

The nucleus contains DNA (deoxyribonucleic acid). The DNA is arranged in groups called chromosomes. This is the genetic material of the cell. Every organism has a specific number of chromosomes in each nucleus of each of its cells. Humans have 46 chromosomes in every cell while roundworms have 2. When not dividing the chromosomes are called chromatin. They become elongated and interwoven at this stage.

A molecule of DNA when the cell is not dividing (in chromatin form): A chromosome as seen at the start of cell division:

Genes are located on the chromosomes. These are the structures that control the production of protein. In this way the genes determine the characteristics of the living thing. 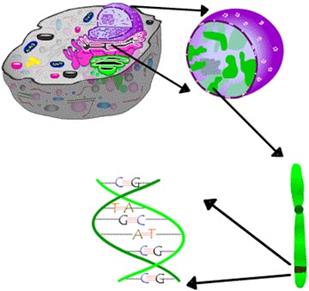 The nucleus of a cell contains chromosomes, on which are the genes consisting of the DNA that codes for proteins, the main ingredients of living beings.

Nuclear pores are openings through which materials enter and leave the nucleus. Large molecules can pass between the cytoplasm and the nucleus through these pores. 1 example is RNA from nucleus to cytoplasm and nucleotides from cytoplasm to nucleus. This will be discussed later in another chapter of your text. 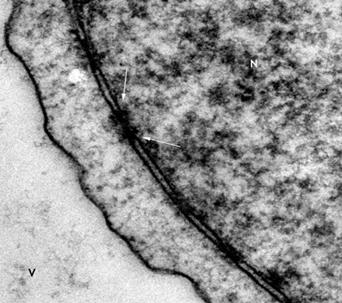 The arrows show a nuclear pore.

The mitochondria are called the powerhouses of the cell. This is where cellular respiration occurs. The end product of cellular respiration is energy. Muscle and liver cells have many mitochondria and produce a lot of energy. The mitochondria have 2 membranes. The inner membrane is folded. Here, at the folds, is where the energy is releases. The more folds it has the more energy is released. Foldings increase during exercise and activity while they decrease during rest.

This is where photosynthesis takes place in green plants. The green pigment is called chlorophyll and is stored in the chloroplasts.
Below is the ultrastructure of a chloroplast.

Ribosomes are composed of RNA and protein. They function in protein synthesis. They make protein using amino acids. This will be discussed in a later chapter of your text.

Below is a generalised ultrastructure of an animal and a plant cell. We have not discussed all the parts labelled since they are not part of your syllabus or will be discussed later in the syllabus. Below the diagrams are definitions to the terms not discussed. 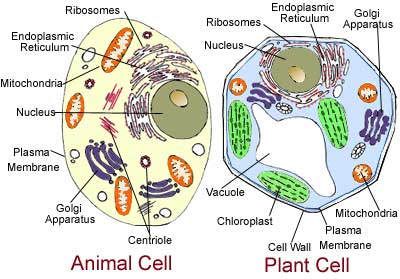 Centriole- Centrioles generally appear in animal cells as two cylinders at right angles to one another, close to the nucleus. When viewed with an electron microscope, the cylinders show up as nine bundles of tiny microtubules arranged in a circle. The centrioles help to form the spindle fibres. Spindle fibres are microtubules that move chromosomes around when the cell is dividing.

Differences Between a Plant and an Animal Cell

Below is a chart showing the general differences between a plant and an animal cell.

All living things can be categorized as being prokaryotic or eukaryotic.

Prokaryotic cells have no nucleus. They do not have membrane-bound organelles such as nuclei, mitochondria or chloroplasts. All prokaryotes are placed in the Kingdom Monera i.e. the bacteria. 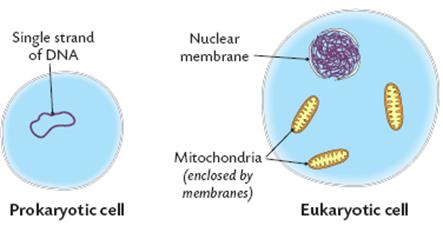