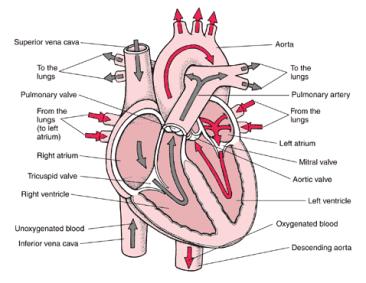 Functions of the Circulatory System

To carry digested food from the small intestine to all areas in the body which need it.
To carry oxygen from the lungs to the rest of the body.
To aid in the disposal of all wastes from the body.
To distribute heat.
To fight diseases by using white blood cells to fight off infection.

Arteries and Veins have many differences

1. Carry blood away from the heart always.
2. Have thick muscular walls
3. Have a pulse
4. Deep under the skin
5. Have no valves
6. Arteries branch at their ends, into tiny arterioles those then join capillaries.

1. Carry blood to the heart.
2. Have thin walls
3. Do not have a pulse
4. Near surface of the skin
5. Have valves to stop back-flow of blood.
6. Veins branch at their beginnings into tiny venules which join capillaries. 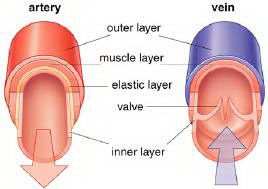 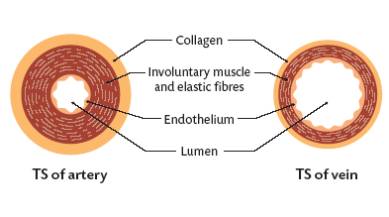 The contraction/relaxation cycles of skeletal muscles squeeze the veins forcing the contained blood towards the heart. 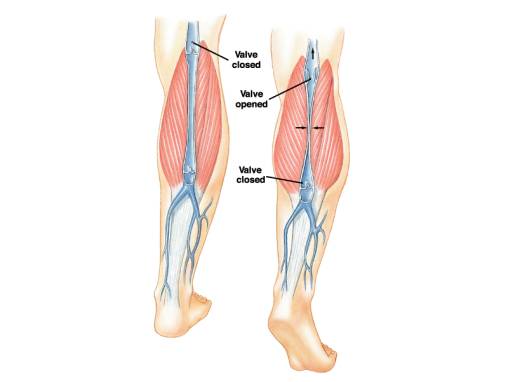 Transport blood away from the heart;

Carry Oxygenated Blood (except in the case of the Pulmonary Artery);

Do not have valves (except for the semi-lunar valves of the pulmonary artery and the aorta).

Transport blood towards the heart;

Carry De-oxygenated Blood (except in the case of the Pulmonary Vein);

Have valves throughout the main veins of the body. These are to prevent blood flowing in the wrong direction, as this could (in theory) return waste materials to the tissues.

Capillaries are small blood vessels acting as veins and arteries. They surround the body cells at the ends of the arteries and at the beginning of the veins. The walls of capillaries are only one cell thick so substances (Food or cells) can easily get through them and into the blood or out. If all the capillaries of the body were set end to end they would be 100,000 km long!

The walls (outer structure) of arteries contain smooth muscle fibre that contract and relax under the instructions of the sympathetic nervous system.

Transport blood away from the heart;

Transport oxygenated blood only (except in the case of the pulmonary artery).

Arterioles are tiny branches of arteries that lead to capillaries. These are also under the control of the sympathetic nervous system, and constrict and dilate, to regulate blood flow.

Transport blood from arteries to capillaries;

Arterioles are the main regulators of blood flow and pressure.

Capillaries are tiny (extremely narrow) blood vessels, of approximately 5-20 micro-metres (one micro-metre = 0.000001metre) diameter.
There are networks of capillaries in most of the organs and tissues of the body. These capillaries are supplied with blood by arterioles and drained by venules. Capillary walls are only one cell thick (see diagram), which permits exchanges of material between the contents of the capillary and the surrounding tissue.

Function is to supply tissues with components of, and carried by, the blood, and also to remove waste from the surrounding cells … as opposed to simply moving the blood around the body (in the case of other blood vessels);

Exchange of oxygen, carbon dioxide, water, salts, etc., between the blood and the surrounding body tissues.

Venules are minute vessels that drain blood from capillaries and into veins. Many venules unite to form a vein.

Drains blood from capillaries into veins, for return to the heart

The walls (outer structure) of veins consist of three layers of tissues that are thinner and less elastic than the corresponding layers of aerteries.
Veins include valves that aid the return of blood to the heart by preventing blood from flowing in the reverse direction.

Transport blood towards the heart;

Transport deoxygenated blood only (except in the case of the pulmonary vein). 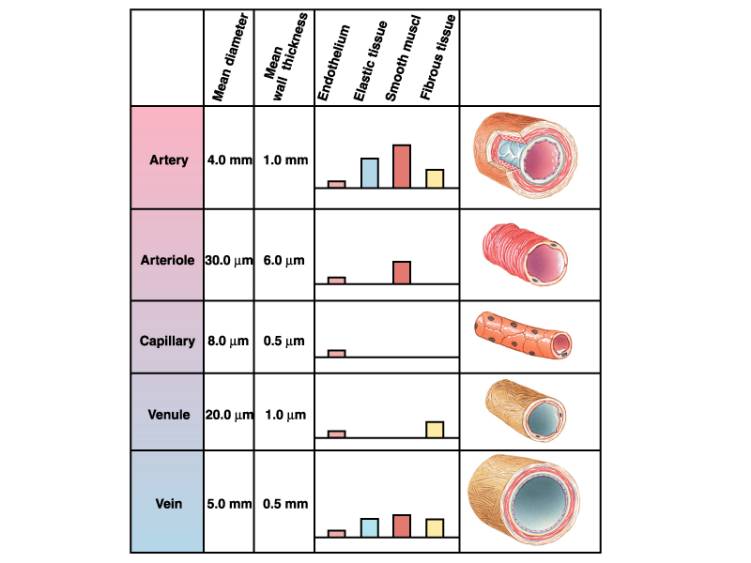 The heart is located slightly to the left of the centre of your chest between the 2 lungs. It is made of cardiac muscle and is surrounded by a double membrane called the pericardium. There is fluid between these 2 membranes called pericardial fluid. This fluid helps to reduce friction when the heart beats. The heart is about the size of a clenched fist.

The human heart is primarily a shell. There are four cavities, or open spaces, inside the heart that fill with blood. Two of these cavities are called atria. The other two are called ventricles. The two atria form the curved top of the heart. The ventricles meet at the bottom of the heart to form a pointed base which points toward the left side of your chest. The left ventricle contracts most forcefully, so you can best feel your heart pumping on the left side of your chest. 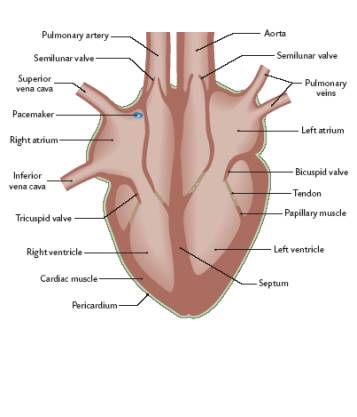 The top of the heart connects to a few large blood vessels. The largest of these is the aorta, or main artery, which carries nutrient-rich blood away from the heart. Another important vessel is the pulmonary artery which connects the heart with the lungs as part of the pulmonary circulation system. The two largest veins that carry blood into the heart are the superior vena cava and the inferior vena cava. They are called “vena cava” because they are the “heart’s veins.” The superior is located near the top of the heart. The inferior is located beneath the superior.

The heart’s structure makes it an efficient, never-ceasing pump. From the moment of development through the moment of death, the heart pumps. The heart, therefore, has to be strong. The average heart’s muscle, called cardiac muscle, contracts and relaxes about 70 to 80 times per minute without you ever having to think about it. As the cardiac muscle contracts it pushes blood through the chambers and into the vessels. Nerves connected to the heart regulate the speed with which the muscle contracts. When you run, your heart pumps more quickly. When you sleep, your heart pumps more slowly.

Considering how much work it has to do, the heart is surprisingly small. The average adult heart is about the size of a clenched fist and weighs about 11 ounces (310 grams). Located in the middle of the chest behind the breastbone, between the lungs, the heart rests in a moistened chamber called the pericardial cavity which is surrounded by the ribcage. The diaphragm, a tough layer of muscle, lies below. As a result, the heart is well protected.

THE FLOW OF BLOOD THROUGH THE HEART 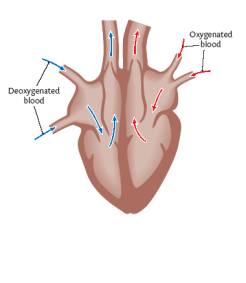 Day and night, the muscles of your heart contract and relax to pump blood throughout your body. When blood returns to the heart, it follows a complicated pathway. If you were in the bloodstream, you would follow the steps below one by one.

#1 Oxygen-poor blood (shown in blue) flows from the body into the right atrium.

#2 Blood flows through the right atrium into the right ventricle.

#3 The right ventricle pumps the blood to the lungs, where the blood releases waste gases and picks up oxygen.

#4 The newly oxygen-rich blood (shown in red) returns to the heart and enters the left atrium.

#5 Blood flows through the left atrium into the left ventricle.

#6 The left ventricle pumps the oxygen-rich blood to all parts of the body.

This system separates the oxygenated and the deoxygenated blood. (See diagram below) 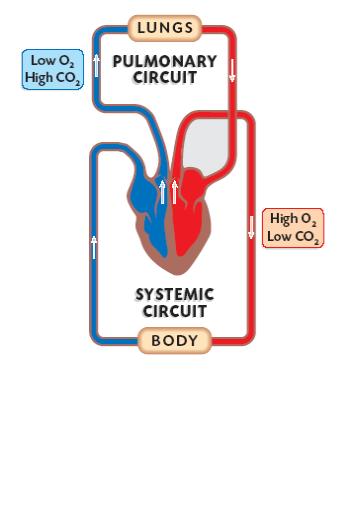 The Systemic System can be divided into THREE SUBSYSTEMS:

A. CORONARY CIRCULATION – SUPPLIES BLOOD TO THE HEART.

B. RENAL CIRCULATION – SUPPLIES BLOOD TO THE KIDNEYS. Nearly one-forth of the blood that is pump into the Aorta by the Left Ventricle flows to the Kidneys. The Kidneys Filter Waste From the Blood.

C. HEPATIC PORTAL CIRCULATION – Nutrients are picked up by capillaries in the small intestines and are transported to the Liver. Excess nutrients are stored in the Live for future needs. The Liver receives oxygenated blood from a large Artery that branches of the Aorta. 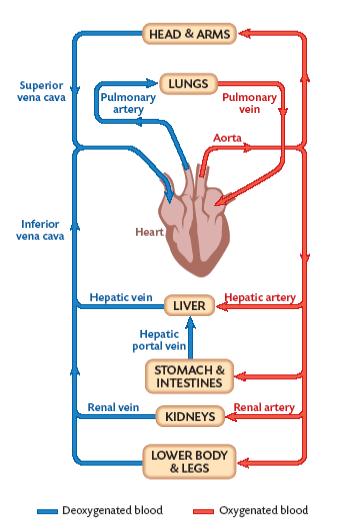 Blood for the heart to use

The heart also needs a supply of blood for its nourishment. It does not use the blood it pumps for itself. The blood flowing through the heart does not directly serve the heart. Like all other organs the heart muscle has its own blood circuit. The heart gets blood from the coronary arteries that emerge directly from the aorta. Two coronary arteries arise from the aorta just beyond its semilunar valve. The right coronary artery mostly serves the right atrium and right ventricle. The left coronary artery is much larger and supplies the left atrium and left ventricle. The blood then goes through arterioles into capillaries and then to the heart’s cells. Venules then carry the blood to the coronary veins and back to the right atrium.

The pumping action of the heart is controlled by the pacemaker (also known as the sino-atrial node (SA). It is in the wall of the right atrium. The pacemaker receives messages from the brain. Two nerves from the medulla oblongata connect to it influencing its rate of contraction. One nerve quickly accelerates the heart rate and the other can quickly reduces it back to resting rate. These messages are transmitted as electrical impulses that cause the atria (both left and right) to contract. This contraction is called atrial systole. Contraction of the atria sends blood to the ventricles.

The rate of heartbeat is very important. The average healthy person will have a heart rate of about 70-80 beats per minute. Brain impulses and hormones can change this rate. Also, exercise, temperature, emotions, and shock will increase the heart rate. Relaxation and sleep decrease the rate.

STAGES OF THE HEARTBEAT

A heartbeat is a two-part pumping action that takes about a second. As blood collects in the upper chambers (the right and left atria), the heart’s natural pacemaker (the SA node) sends out an electrical signal that causes the atria to contract. This contraction pushes blood through the tricuspid and bicuspid valves into the resting lower chambers (the right and left ventricles). This part of the two-part pumping phase (the longer of the two) is called atrial systole.

The second part of the pumping phase begins when the ventricles are full of blood. The electrical signals from the SA node travel along a pathway of cells to the ventricles, causing them to contract. This is called ventricular systole. As the tricuspid and bicuspid valves shut tight to prevent a back flow of blood, the semilunar valves are pushed open. While blood is pushed from the right ventricle into the lungs to pick up oxygen, oxygen-rich blood flows from the left ventricle to the heart and other parts of the body.

After blood moves into the pulmonary artery and the aorta, the ventricles relax, and the pulmonary and aortic valves close. The lower pressure in the ventricles causes the tricuspid and bicuspid valves to open, and the cycle begins again. This series of contractions is repeated over and over again, increasing during times of exertion and decreasing while you are at rest.

THE SOUNDS OF THE HEART

The sounds of the heart are caused by the closing of the valves.

3. A heart murmur is an abnormal sound of the heart. It is usually an indication of damaged valves.

Blood pressure is the blood pressing against the blood vessel walls. It is measured by a sphygmomanometer.

The pressure varies along the circuit decreasing from artery to arteriole to capillary to venule to vein.

Pressure is highest at the start of the artery and lowest at the entrance to the atrium.

Blood pressure is much higher in the aorta than in the pulmonary artery.

The measures of a person s blood pressure it taken at a large artery in the upper arm. It is the pressure need to stop blood flow in this artery and is measured at diastole and systole. Standard healthy readings are 80 mm Hg diastolic, 120 mm Hg systolic.

People with a diastolic number at or above 95 have hypertension (high blood pressure). It is usually caused by blockages in the arteries.