The human respiratory system consists of the lungs and tubes associated with the lungs. It is located in the thorax or chest. The thorax is surrounded by the ribs. The diaphragm forms the base of the thorax.

Parts of the Respiratory System

The Nose or Nasal Cavity

As air passes through the nasal cavities it is warmed and humidified, so that air that reaches the lungs is warmed and moist.? The Nasal airways are lined with cilia and kept moist by mucous secretions. The combination of cilia and mucous helps to filter out solid particles from the air an Warm and moisten the air, which prevents damage to the delicate tissues that form the Respiratory System. The moisture in the nose helps to heat and humidify the air, increasing the amount of water vapour the air entering the lungs contains. This helps to keep the air entering the nose from drying out the lungs and other parts of our respiratory system. When air enters the respiratory system through the mouth, much less filtering is done. It is generally better to take in air through the nose.

To review: he nose does the following:

1. Filters the air by the hairs and mucous in the nose

The pharynx is also called the throat. As we saw in the digestive system, the epiglottis closes off the trachea when we swallow. Below the epiglottis is the larynx or voice box. This contains 2 vocal cords, which vibrate when air passes by them. With our tongue and lips we convert these vibrations into speech. The area at the top of the trachea, which contains the larynx, is called the glottis. 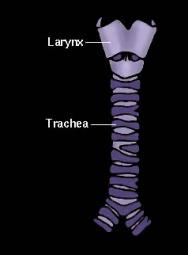 The trachea or windpipe is made of muscle and elastic fibres with rings of cartilage. The cartilage prevents the tubes of the trachea from collapsing. The trachea is divided or branched into bronchi and then into smaller bronchioles. The bronchioles branch off into alveoli. The alveoli will be discussed later. 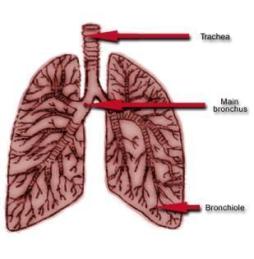 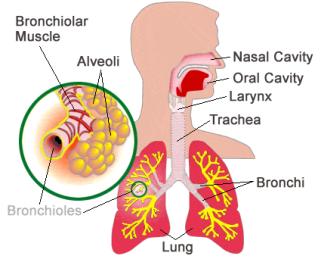 These tubes are lined with mucous-secreting cells and tiny hairs called cilia. The mucous traps bacteria, dust and viruses. The cilia beat and create an upward current. This moves the mucous up and into the oesophagus. Here it goes to the stomach. When we clear our throats we force the mucous away from our vocal cords. This is often called coughing. It is used to get rid of irritants and excess mucous from our respiratory system.

The lungs are spongy structure where the exchange of gases takes place. Each lung is surrounded by a pair of pleural membranes. Between the membranes is pleural fluid, which reduces friction while breathing. The bronchi are divided into about a million bronchioles. The ends of the bronchioles are hollow air sacs called alveoli. There are over 700 million alveoli in the lungs. This greatly increases the surface area through which gas exchange occurs. Surrounding the alveoli are capillaries. The lungs give up their oxygen to the capillaries through the alveoli. Likewise, carbon dioxide is taken from the capillaries and into the alveoli. 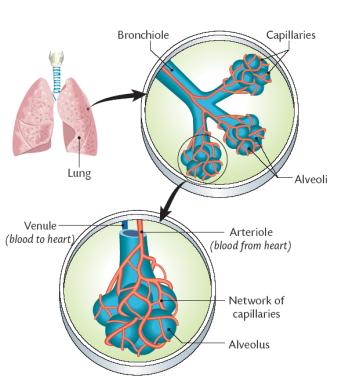 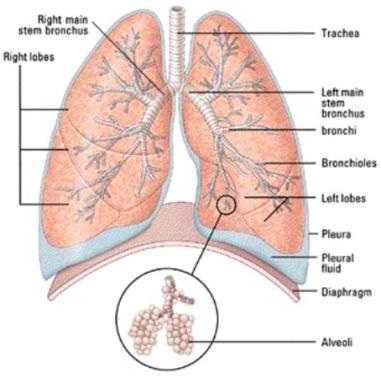 Body cells use the inhaled oxygen gotten from the alveoli of the lungs. In turn, they produce carbon dioxide and water, which is taken to the alveoli and then exhaled. These exchanges occur as a result of diffusion. In each case the materials move from an area of high concentration to an area of lower concentration.

Here, the blood flows from the heart to the lungs: 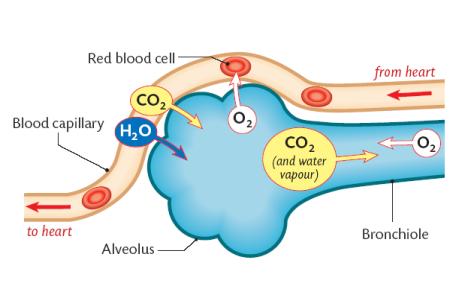 Here the blood flows from the lungs to the body cells. The alveoli take in the water and the carbon dioxide: 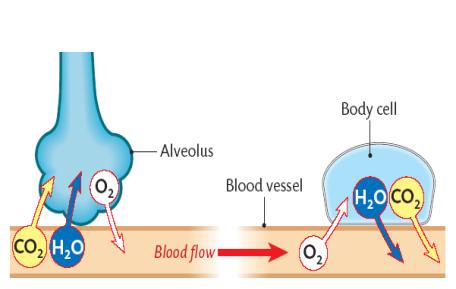 The alveoli are well suited for the important job they have. There are about 300,000,000 alveoli per lung! That means there is a great surface area for gas exchange. Also, the walls of the alveoli as well as the capillaries are very thin so that the gases can diffuse readily.

When the blood picks up the diffused gases the gases are carried to their destinations. Most of the oxygen is carried by the haemoglobin in the red blood cells with only a small % dissolved in the plasma. Carbon dioxide and water are carried in the plasma of the blood.

The following chart compares the content of air before as it is inhaled (Inspired Air) and as it is exhaled (Expired Air).

The Mechanism of Breathing

Inspiration or inhalation is said to be an active process because it involves muscle contraction. The diaphragm and intercostal muscles contract. The contracting diaphragm flattens and stretches the elastic lungs downward. The contracting intercostals pull the ribcage up and out causing the elastic lungs to stretch. The expanding lungs cause the air inside to expand (a gas will always fill its container). The expansion of air causes a drop in air pressure in the lungs. The air in the lungs is at a lower pressure than the air outside. Air flows from higher to lower pressure so air flows into the lungs from outside. 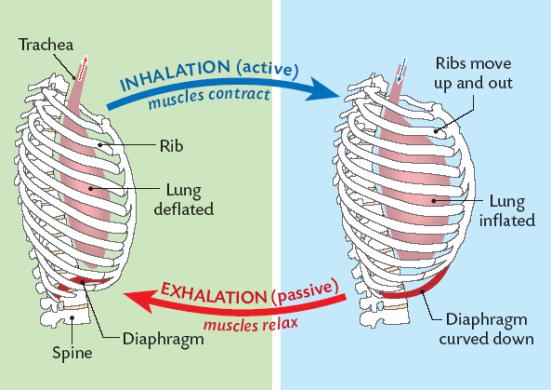 Expiration or exhalation is said to be a passive process because it does not involve muscle contraction. The diaphragm and the intercostal muscles relax. The deforming force on the elastic lungs has been removed. The lungs recoil elastically reducing their volume a passive process. The volume of air in the lungs decreases causing an increase in the air pressure. The air in the lungs is at a higher pressure than the air outside. Air flows from higher to lower pressure so the air flows out of the lungs. The elastic recoil of the lungs pulls up the adhering diaphragm and drags in the adhering ribcage.

Asthma is a breathing disorder. Its symptoms include coughing, wheezing, tightness of chest and breathlessness. It is caused by an allergic reaction to materials in the environment such as pollen, cigarette smoke, house dust and pet dander. More recently scientists have found a link between stress and anxiety with the onset of asthma.

Asthma is a chronic ailment in which inflammation of the airways, or bronchi, affects the way air enters and leaves the lungs, thereby disrupting breathing. When allergens or irritants come into contact with the inflamed airways, the already sensitive airways tighten and narrow, making it difficult for the person to breathe. Progressively severe symptoms can lead to an asthma attack. In asthma attacks, the overproduction of mucus lining the airways further narrows the airways, limiting oxygen intake and making it more difficult to breathe. 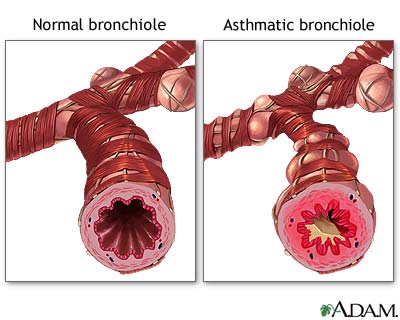 To prevent asthma the allergen must be identified and avoided. Also, in the case of stress, the stress must be alleviated.

The treatment of asthma is usually by Inhalers. These devices (sometimes called ‘puffers’) contain a gas that will propel the correct dose of medication when the top is pressed down. This is inhaled into the airways. There are two basic categories of inhaler medicines that are used for asthma: relievers – which treat the symptoms and preventers – which can prevent the symptoms. 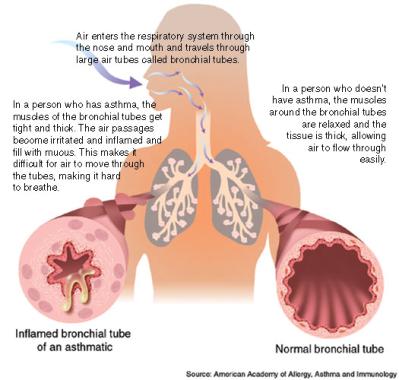 We thank our friends at http://sportsbetpromocodes.co.uk for supporting this site!