Transport of Materials in a Flowering Plant

Plants must:
1. Take in water, mineral salts, and carbon dioxide.
2. Eliminate waste water and oxygen.
3. Distribute food within the plant after it is made in the leaves.

The following will discuss how the plant does these things.

A. Carried out by root hairs located at the zone of differentiation.
B. Many root hairs increase the surface area available for water absorption.
C. Fugal hyphae attached to roots also absorb water and pass it on to roots.
D. The process of water intake at the roots is called osmosis. Osmosis is the movement of a substance through a membrane. Water moves because the overall water potential (amount of water) in the soil is higher than the water potential in the roots and plant parts. Water continues to diffuse from the inside of the root hairs, through the ground tissue and into the xylem of the root. The water can then travel up through the xylem of the root and stem, into the petiole, and into the leaves of the plant.

Upward Movement of Water Within the Plant

There are 2 processes that enable the water to move up a plant. They are root pressure and transpiration.

1. Root Pressure: Water moves into the roots. As new water moves into the roots it causes the water to move up the plant. Root pressure is capable, under ideal atmospheric conditions, of pushing water one or two feet above the ground.Since root pressure is not strong enough to move water up very high another process is needed to enable the water to continue up the plant. This is transpiration.

2. Transpiration- Transpiration is the loss of water through the leaves and other parts of the plant. Most transpiration occurs through openings, called stomata, on the underside of the leaves. Water moves, because of root pressure, up into the stem. Because water is being lost out of the stomata of the leaves the water in the stems is being pulled up. Why is this? Because water molecule cling to each other by cohesion. As water molecules cling to each other as they move up the stem and into the leaves they pull the molecules up as they tranpire out of the stomata. This is called The Cohesion-Tension Model of water transport in xylem. As water molecules are stuck together by cohesion the entire column of water in the xylem adheres to the sides of the xylem. It is said that the water in under tension as the column moves up the xylem. At the same time, the xylem tube narrows because of the tension. 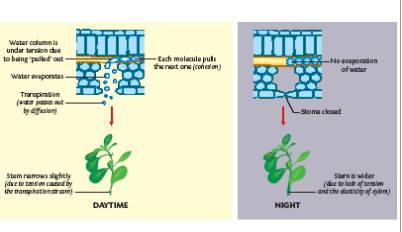 In Summary… The Cohesion Tension Theory

Water is constantly lost by Transpiration in the leaf. When one water molecule is lost another is pulled along. Transpiration pull is the main cause of water movement.

Control of Transpiration in the Leaves

Plants must have the ability to prevent too much water from transpiring out of the the stomata (stoma, singular) of the leaves. If they didn’t do so they would lose too much water and the plant would shrivel up and die.
They accomplish this in the following ways:

Transverse Section of a Leaf 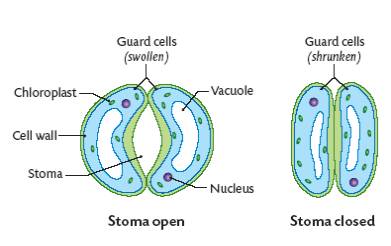 The amount of CO2 present is another factor in the opening of the stomata. High levels of CO2 in the air spaces of the leaf causes the stomata to close. This occus at night. In the daytime when the CO2 is entering the mesophyll and to carry out photosynthesis the stomata open. (see page 247, fig. 25.17 of book.)

Minerals enter the root by the root hairs. The entry of these minerals requires energy. This is called active transport of materials. Root hairs contain many mitochondria to supply this energy. Mitochondria are organelles within the cytoplasm of cells which convert carbohydrates into energy by cellular respiration.

Photosynthesis occurs mostly in the mesophyll layer of the leaf. Carbon dioxide must get to this layer. There are 2 sources of carbon doxide for the mesophyll:

1. Most of the CO2 come in through the stomata. It then diffuses through the air spaces and into the spongy and palisade cells.
The rate of CO2 uptake is called the apparent rate of photosynthesis.
2. CO2 is produced in the cells of the leaf through cellular respiration within the leaf. The leaf carries on cellular respiration in order to obttain energy for its life processes. More CO2 is produced in this way during high temperatures.

The real or true rate of photosynthesis = rate of CO2 through stomata + rate of CO2 produced by respiration.

Photosynthesis takes place in the ground tissue of the leaf. (Mesophyll layer). It occurs as chlorophyll is used with the sun’s energy and CO2. The 2 main products of photosynthesis are Oxygen and Glucose.

What Happens To These 2 Products of Photosynthesis?

1. Oxygen- a. Diffuses through the air spaces of the leaf and then out of the stomata.
b. Some of the oxygen is used by the leaf for cellular respiration.
2. Glucose- a. Some of the glucose made at the leaf is used by the leaf for respiration.
b. Most is converted into other carbohydrates and used by parts of the plant.
1. Starch stored in the leaves is food and energy for leaf eating animals.
2. Some glucose is converted into sucrose and carried by the phloem sieve tube cells to other parts of the plant. This sugary water carried by the phloem is called phloem sap. This is carried to growth areas of the plant where it is needed for new growth, for respiration, or is stored as starch

Plants store food in their roots, stems, and leaves by modifying or changing them.

1. Modified roots- Some dicots produce large, v-shaped taproots. In some plants such as the carrot or turnip the tap root becomes swollen and fleshy with stored food. The food is used by the plant later in its life cycle, People harvest the root before the food is used up so that we can eat it.

2. Modified stems- Potato plants produce and underground stem system. The tips of the underground stem become swollen with stored starch. These swollen tips are called tubers. The tuber is what we know as the potato.

If not harvested and eaten the potato grows new potato plants from buds on the potato called the “eyes” of the potato.

Cells within the stem of plants need oxygen to carry on respiration. As a result, they produce carbon dioxide and water as a waste product of respiration.

The bark of the stems of trees and shrubs have openings called lenticels which allow for the movement of oxygen into and CO2 and water out of them.