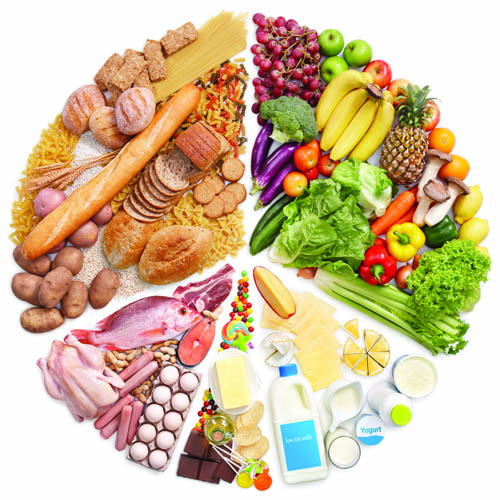 Nutrition is the way living things obtain and use food. Macronutrients are the chemical substances present in food that are use by living things. Food is material that is a good source of one or more of the following:

They are: They are:

There are three trace elements. They are found in tiny amounts in organisms. They are:

All of these elements except carbon, hydrogen and oxygen are called minerals.

Carbohydrates are formed by different ratios of the elements carbon, hydrogen and oxygen. The general formula is C x (H2O) y and x and y are the same number. In other words, there is twice as much hydrogen as there is oxygen in a carbohydrate.

These are the smallest unit of carbohydrates. They consist of a single sugar unit. The most common one is glucose which is C6 H12 O6. They are sweet to taste and soluble in water. Glucose is the main molecule from which animals get energy. They get this energy from eating fruits, sweets, etc. Plants make glucose by photosynthesis.

Polysaccharides are the carbohydrate type that is insoluble in water. (Some are slightly soluble.) They are made of many monosaccharides that are linked together. They have thousands of repeating units. Examples of polysaccharides are:

Starch: This is a plant glucose reserve. Examples of food with starch food reserve are rice and potatoes. Starch is easily broken down (digested) because the molecules are arranged in a line.

Cellulose: This is found in plant cells walls and fibre in our diet. Common forms are paper and cotton. These molecules are in a line but also have strong cross walls. Because it is difficult to digest it is a good source of fibre in our diets. Because it is so strong it is a very good protection in the cell walls of plants.
Glycogen: This is glucose reserve of animals and fungi. Glycogen is stored in the muscles and liver. 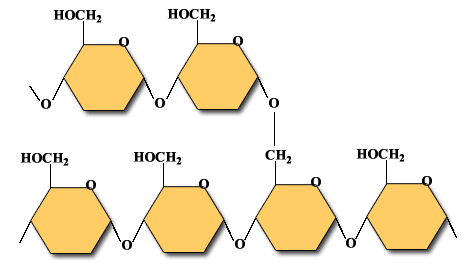 Cellulose walls of plant cells.
Chitin in the cell walls of fungi.

Energy Source: energy released by the respiration of glucose is used to make ATP.
Energy Storage: starch in plants, glycogen in animals and fungi.

Lipids, like carbohydrates, contain carbon, hydrogen and oxygen. However, unlike carbohydrates, they have no simple ratios. Also, they have very little oxygen.
Fats are lipids that are solid at room temperature while oils are liquid at room temperature.
The smallest lipids are composed of one glycerol molecule linked to 3 fatty acid molecules. Because it has 3 fatty acids it is called a triglyceride.
Good dietary sources of lipids are meat, milk, butter, cheese, plant oils, and margarine. 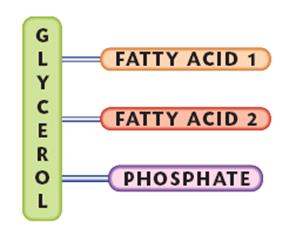 Lipids and phospholipids are very important in cell membrane structure.
The protective wax cuticle on the outside of leaves.
Provide heat insulation in animals.
Protect internal organs of animals.
Needed for the formation of cell membranes.

Energy storage: Lipids more than twice the energy of carbohydrate or protein.
Energy source: This energy from lipids is released during respiration.
Storage of fat-soluble vitamins.
Some lipids function as hormones. 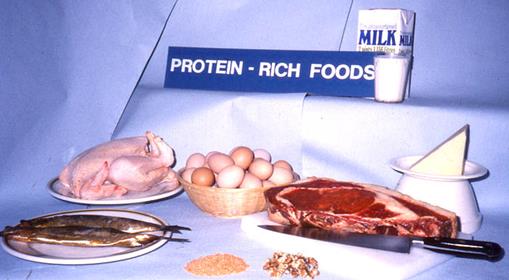 All proteins contain the elements C, H, O and N. Some proteins also contain P and/or S. There is no set ratio of atoms in proteins. They contain many atoms and are very large and complex. They contain many combinations of smaller units called amino acids. There are 20 common amino acids. Two Amino Acids bond to form a DIPEPTIDE. Two Amino Acids form a Covalent Bond, called a PEPTIDE BOND. All 20 amino acids can bond to each other one at a time, forming a long chain called a POLLYPEPTIDE. Proteins are composed of one or more polypeptides. Some proteins are very large molecules, containing hundreds of amino acids.

All proteins contain the following:

Amino acida -COOH, which is a carboxyl group (acidic).
a -NH2, which is an amine group (basic).
an -H hydrogen.
a residue R which varies depending on the amino acid. 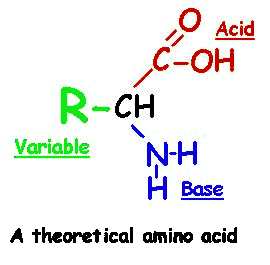 All 20 different amino acids have this same structure, but their side chain groups (the R group) may vary in size, shape, charge, and reactivity. The amino acids could be considered as the alphabet in which the proteins are written. The different combinations of the alphabet determine the type of protein which is made.

Along with the R group variation, proteins also differ by their shape. Fibrous proteins form long fibres and have little folding to make large 3 dimensional shapes. Globular proteins have many foldings and are, therefore, rounded. Pritons are proteins that are folded incorrectly. They cause various nervous system diseases in animals and humans.

Excess amino acids are taken to the liver and form urea. This process is called deamination. The urea is carried by the blood to the kidneys where it is excreted as part of the urine.

Keratin: in hair and outer layer of the skin.
Myosin: major protein in skeletal and cardiac muscle.
Needed for the formation of cell membranes.

A vitamin is an organic compound needed in small quantities in the diet for health. They are not made by the body but are ingested in nutrition. There are 2 general types of vitamins:

Water-soluble vitamins: These are vitamins that are soluble in water. Vitamin C (ascorbic acid) is the most common water-soluble vitamin. It is obtained in fresh fruit and vegetables. It is needed to make and maintain connective tissue and the absorption of iron by the gut. Long term deficiency of vitamin C causes a disease called scurvy. Scurvy symptoms include internal bleeding, bruising, bleeding gums, poor healing.

Fat-soluble vitamins: These vitamins are soluble in fat. The most common fat soluble vitamin is Vitamin D and the most common Vitamin D is D2 (calciferol). Vitamin D is obtained from milk, eggs, liver, fish liver oils and produced in skin exposed to UV light. It is needed for bone and tooth formation, bone maintenance and the absorption of calcium from the gut. Long term deficiency cause diseases known as rickets and osteomalacia. Major deficiency symptoms include late teething and walking, deformed legs and arms, weak bones.

Metabolism is the full set of chemical processes carried out by a living organism. Metabolism may be:

One of the most important anabolic reactions found in nature is photosynthesis. In photosynthesis the plant converts carbon dioxide and water into glucose:

Catabolism: the breakdown of large complex molecules into smaller simpler biomolecules. Catabolic reactions release energy and require enzymes. These reactions include digestion of food ant the decay of dead matter.

One of the most important anabolic reactions found in nature is respiration. In respiration the organism breaks down a large, complex molecule such as glucose, into smaller molecules of water and oxygen. This process releases energy from the glucose.

Minerals or mineral nutrients are soluble inorganic salts that contain elements essential for metabolism. Minerals are only needed in small quantities in comparison to proteins, carbohydrates and lipids. Plants obtain their minerals by absorbing them from external water soil water, freshwater and seawater. Animals receive most of their minerals in the food they eat; some from the water they drink.

The construction of hard parts: calcium for teeth and bone; nitrogen for chitin in the cell walls of fungi.
The formation of soft tissue: nitrogen and sulphur in the protein of muscle tissue.
To maintain correct fluid concentration: sodium chloride role in blood plasma concentration.
You are responsible to know 2 plant and 2 animal minerals:

Plant Minerals:
Calcium: for the middle lamella that glues neighbouring plant cell walls.
Magnesium: for the production of chlorophyll so vital for photosynthesis.
Animal Minerals:

The main purposes of water are:

All metabolism occurs within water.
Materials are transported within living things by water.
Many organisms live in water.

More specifically, water is needed for:

It is the fluid component of life: 90% of cell cytoplasm, 92% of blood plasma, 97% of tissue fluid and lymph. It is found mainly in the cytoplasm of cells as well as the plasma of blood and in tissue fluid surrounding the cells.

Water is known as the Universal Solvent. It dissolves many molecules and allows chemical reactions to take place in the cells and in the water that surrounds the cells. Also, water dissolves molecules in the soil to enable these molecules to be transported through the roots of plants and then throughout the plants.

Water is needed for many chemical reactions to take place within living things. Two of these reactions previously discussed are photosynthesis and respiration.

The movement of materials through cell membranes by diffusion, osmosis and active transport. (This will be discussed fully in a later chapter of your text.)

To control the shape of the cells of living things:
Immature plant cells enlarge to mature size and shape as a result of their absorption of water by osmosis.
Opening and closing of the stoma by change in shape of the guard cells by change in their turgor. Turgor plays an important role in the support of soft plant tissue. (This will be discussed fully in a later chapter of your text.)