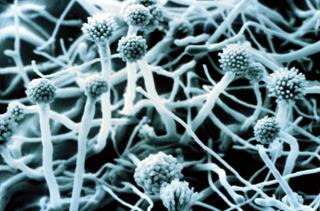 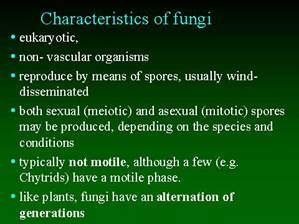 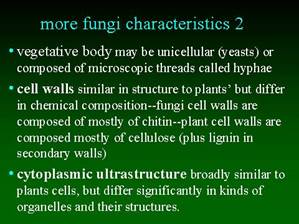 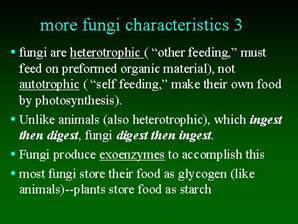 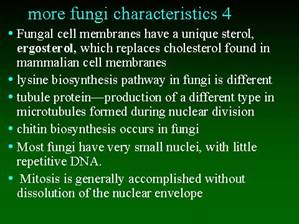 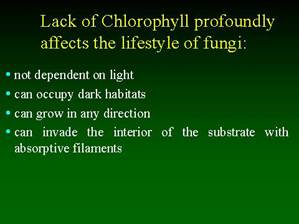 Under the medium power of the microscope (original photograph at 125), the typical Rhizopus structure is apparent, with often multiple sporangiophores arising from a single point on the mycelium. Despite the vigour of the mycelium, the sporangiophores in this species are quite short, less than 1 mm. 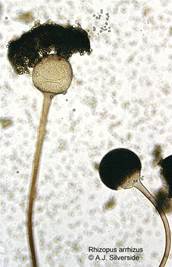 Here the intact sporangium is seen to the right, but the sporangial wall has already dissolved and the mass of sporangiospores is beginning to lift away. The left-hand sporangium is already losing its spores, exposing the almost globose columella.

The scar left by the sporangial wall is visible towards the base of the columella. 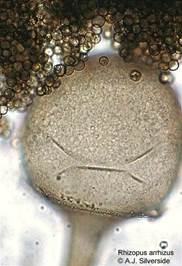 Here at higher power (original photograph at 500), the sculptured surface of the columella can be seen. The creases can be regarded as simply an artifact of the slide mount, no doubt resulting from the pressure of the coverslip. The dark spores can be seen more easily.

Hyphae secrete digestive enzymes into the external environment.
External digestion of complex biomolecules.
Absorption of the simple soluble products of digestion by diffusion and active transport.
Distribution of absorbed nutrients through the mycelium. 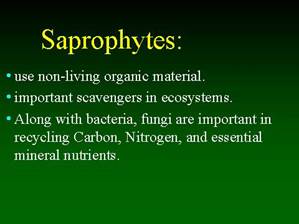 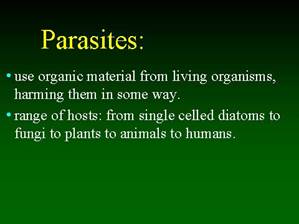 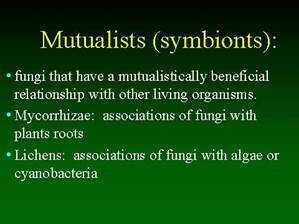 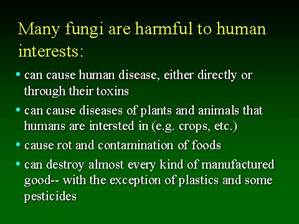 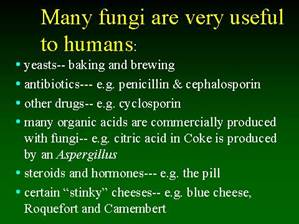 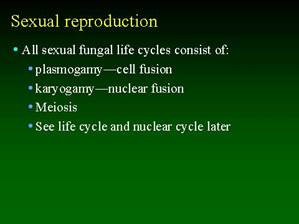 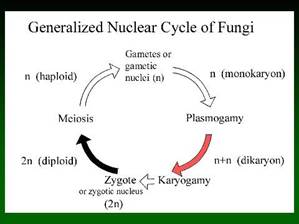 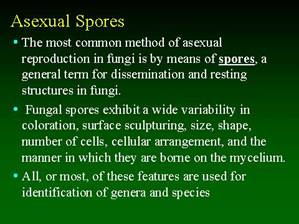 Asexual Reproduction
Vegetative structure is haploid (n).
Sporangia form at the tip of sporangiophores.
The sporangium fills with haploid nuclei and cytoplasm.
The columnella forms separating the sporangium from the sporangiophore.
Each nucleus with cytoplasm forms a haploid spore with a tough resistant wall.
The spores are wind dispersed.
The spores germinate forming a new haploid mycelium if conditions are suitable.

Mycelia of opposite strain are close.
Hyphae of opposite strain grow towards each other.
The touching tips of the hyphae fill with nuclei and cytoplasm progametangia formed.
A cross wall forms behind each tip forming gametangia.
The hypha behind each gametangium is called a suspensor.
The contents of the gametangia mix.
The nuclei of opposite strains fuse in pairs fertilisation.
The combined gametangia develop into a diploid zygospore.
The zygospore is thick-walled resistant and dormant.
In favourable conditions the zygospore germinates by meiosis.
A haploid sporangiophore with a spore-filled sporangium grows from the zygospore.
The spores are wind dispersed and germinate forming a new haploid mycelim.

Asexual reproduction by budding.
Good growth conditions, cell increasing in size.
A small bubble-like extension grows from the cell.
The nucleus undergoes mitosis.
A daughter nucleus moves into the bud.
The bud may remain attached and form a small colony by further budding.
The bud may detach and undergo budding.
Budding is a very fast method of reproduction. 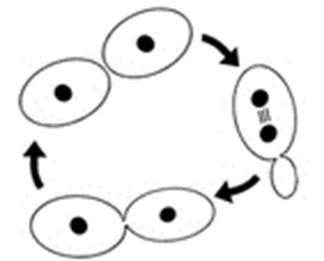 PARTS OF FUNGUS- DEFINED AND ILLUSTRATED

HYPHAE: a tubular filament growing at its tip, new hyphae form by branching. 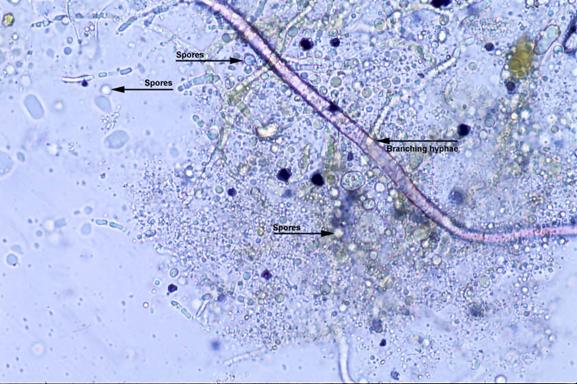 MYCELIUM: all the hyphae together making up the vegetative mass of the fungus. 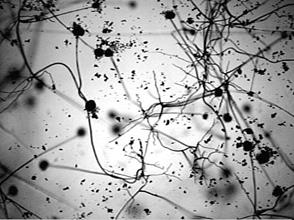 RHIZOIDAL HYPHAE: penetrate the solid medium anchoring the fungus.
SPORANGIUM: a vessel in which the spores are formed and are released for wind dispersal.
SPORANGIOPHORE: a hypha carrying a sporangium. 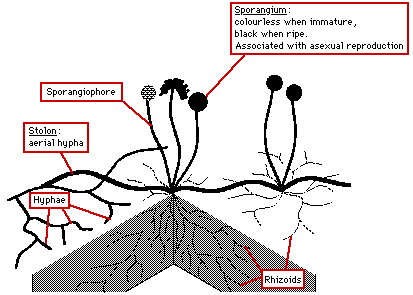 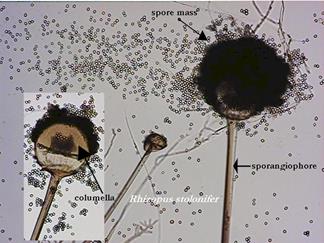 APOPHYSIS: a swelling beneath the sporangium. 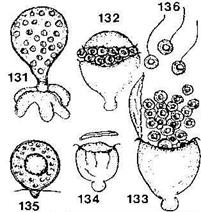 What are commonly called mushrooms and toadstools are the reproductive organs of certain fungi. Scientifically there is no difference between mushrooms and toadstools.
There are no features that distinguish edible from poisonous fungi. The ability to recognise the handful of deadly types is essential.
Identification of the good edible types is a safe starting point. 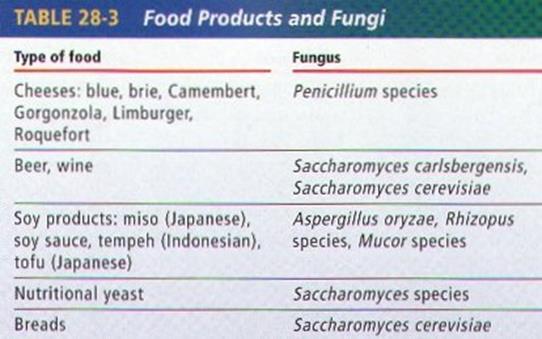 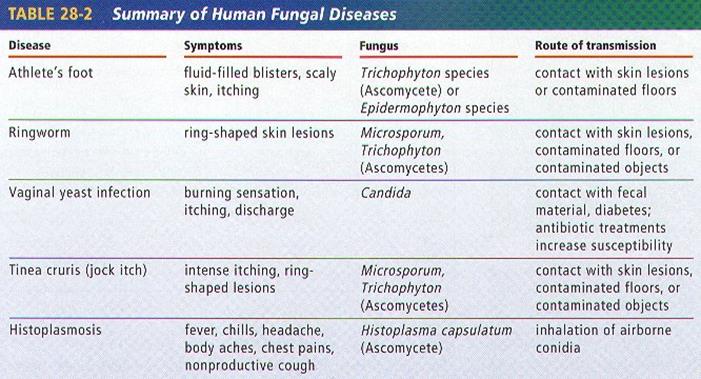 FUNGI AND THE ENVIRONMENT

1. Most Fungi are either SAPROPHYTES OR DECOMPOSERS THAT BREAK DOWN AND FEED ON DECAYING ORGANIC MATERIAL OR DEAD ORGANISMS.

2. Fungi obtain nutrients to absorb by secreting digestive enzymes onto the food source. The enzymes break down, or digest, the food.

3. The breakdown, or digestion, of organic material can also be called DECOMPOSITION. Any organism that causes decomposition can be called a DECOMPOSER.

4. Fungi work along with the Monerans and Protists to decompose the waste and remains of plants and animals.

5. When fungi secretes digestive enzymes into a food source, the Nutrients are released to be used by the fungus and other organisms.

6. The Nutrients are RECYCLED and Returned to the Environment.

7. Without decomposers, ecosystems would collapse, because many organisms would not obtain enough nutrients to stay alive.

8. One scientist estimated that a layer of organic debris about 12 miles thick would now cover the earth if decomposition had never occurred.