Photosynthesis is the production of organic compounds from inorganic molecules using light energy trapped by chlorophyll.

Chlorophyll is present in the internal green membranes of the chloroplast. 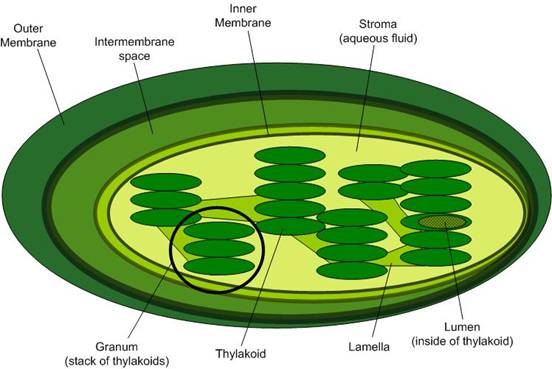 The energy needed for photosynthesis is obtained from sunlight (or artificial light). The green plant stores this energy in the form of ATP (Adenosine TriPhophate) and then uses the energy to carry out photosynthesis.

1. Light is absorbed by the leaf s chloroplasts.

2. The light energy is used to split water molecules.

3. The break up of water releases oxygen, electrons and protons (H+, H ions)
a. The electrons go to the chlorophyll.
b. The protons are stored in the chloroplast.
c. The oxygen passes from the chloroplast. Some will be used by the mitochondria for aerobic respiration and the remainder will be passed into the atmosphere.

4. Some of the light energy is carried to the chlorophyll to form high energy electrons.

5. The high energy electrons and the stored protons combine with carbon dioxide to form glucose. (C6H12O6)

This diagram represents the 5 events listed above:

Source of Water in Leaf Cells

Water from the soil is the major source. It is carried to the leaves in xylem tissue. Some water is also produced by the mitochondria of leaf cells during aerobic respiration.

THE THE LIGHT STAGE

1. Light Absorption: All the colours of white light (except green light) are absorbed by pigments in the chloroplast.

2. Energy Transfer: The energy is transferred to electrons. These electrons become high energy electrons. Within the chloroplasts are electron acceptors.

Pathway 1 (Cyclic Electron Transport): The high energy electrons travel through a series of electron acceptors (electron carrier system) and then back to the chlorophyll molecule. As they travel through the acceptors they lose energy. This energy is in ADP molecules. This is used to combine with 1 more phosphate molecule to form ATP and water. This is a high energy molecule.

Pathway 2 (Non-cyclic Electron Transport): As in Stage 1 the electron has gained energy from sunlight. The electron moves from acceptor to acceptor but does not return to the chlorophyll. As an electron moves from acceptor to acceptor it is passed to NADP+. This causes the NADP+ to become neutral. This NADP molecule receives another electron and becomes NADP- (negative). The negative NADP- attracts the proton + which was previously released when water was broken up. The molecule now becomes NADPH.

SUMMARY OF THE LIGHT STAGE

THE DARK STAGE (THE CALVIN CYCLE)

The dark stage takes place in the stroma of the chloroplast. Unlike the light stage, the dark stage is controlled by enzymes and therefore affected by temperature. The enzyme is ribulose bisphosphate carboxylase oxygenase
(RUBISCO). In this cycle ATP and NADPH, produced in the light stage, provide the energy and electrons to change carbon dioxide (CO2) to carbohydrates (C H O) molecules. Although this stage is called the dark stage it occurs in light and also in darkness as long as the products of the light phase are still available.

The dark stage functions if ATP, NADPH and carbon dioxide are present. At the completion of this stage ADP, Phosphorous, and NADP+ are recycled for use in the light stage.

This diagram summarises the Light and Dark Stages’ dependence on each other.

FacetheFactsUSA.org – Real facts about the USA