Both the male and female reproductive structures have 3 levels of organisation:

The gonad is the name for the organ that produces sex cells in organs. The male gonads are called the testes.
The testes are contained in the scrotum.

The testes produce the sperm cells by meiosis. The temperature must be lower than body temperature for this to occur. There are tubules that are lines with sperm producing cells. Testosterone, the male sex hormone, is also produced in the testes. Once the sperm are produced they mature in the epidymis. This structure is located outside of the testis. If they are not released within about 6 weeks they are broken down and released to the bloodstream by a process called resorption. The sperm are carried to the urethra by the sperm duct. The urethra carries both sperm and urine.

The sperm cells are carried within a liquid called semen. The semen is produced by the seminal vescicles, the
prostate gland, and Cowper’s glands. The semen also contains nourishment for the sperm cells.

The penis is adapted to place sperm cells into the female. The tip is called the glans. Erection occurs when blood rushes into the penis.

THE STRUCTURE OF THE SPERM CELL

Male hormones are produced by the pituitary gland during puberty. They are:

Later in life, at puberty, testosterone causes the enlargement of the reproductive parts as well as the development of secondary sexual characteristics. These are characteristics that distinguish males from females.

The most common cause of male infertility is the low production of sperm. There are many causes of low sperm production. Stress, alcohol and drug abuse, high temperature of the testes, and low testosterone production are all causes.

Ovaries produce eggs and female hormones. At puberty there are about 40,000 diploid eggs. Each egg is enclosed in a group of cells called a follicle. About 20 haploid eggs are produced each month. Usually all but one die. The haploid egg cell is called the ovum and is surrounded by the Graafian follicle which produces the female hormone called oestrogen. Ovulation is the release of the egg from the follicle. This occurs when the follicle bursts.

The fallopian tubes are about 12 cm long and have ends that are funnel shaped. These ends collect the egg after ovulation. Cilia and peristalsis move the egg along the tube. The egg will die in the tube if it is not fertilised.

The uterus, also known as the womb, is made of involuntary muscle. It is lines with the endometrium. This lining thickens with cells and blood every month. This happens in order to nourish the embryo (if present). The opening of the uterus is called the cervix.

The vagina is a muscular tube which allows the sperm to enter the female as well as the baby to exit. It is lined with mucous secreting cells. The urethra opens near the vagina. The vagina is protected by folds of skin called the vulva. The hymen partially blocks the entrance of the vagina. It is broken by sexual intercourse or with the use of tampons.

The menstrual cycle occurs every 28 days from puberty to menopause (the end of the females reproductive life). It occurs only if fertilisation of the egg has not taken place.

The typical events of the menstrual cycle are:

a. The endometrium breaks down and is shed from the body. This is called menstruation.

b. Meiosis occus in the ovary to produce a new egg surrounded by the Graafian follicle.

b. Oestrogen stimulates the production of LH (leuteinising hormone)

a. The surge of LH stimulates ovulation.

b. The egg enters the funnel of the Fallopian tube. It can be fertilised for the next 48 hours.

a. The corpus luteum (yellow body) develops from the remains of the Graafian follicle. This produced progesterone and some oestrogen. The progesterone causes the endometrium to continue to thicken. It also prevents new eggs from forming.

b. The egg that was released at day 14 will die if it is not fertilised.

c. If fertilisation did not take place the corpus luteum begins to degenerate.

a. Oestrogen and progesterone levels decline.

b. The endometrium begins to break down.

c. Day one of the cycle begins.

Endometrium thickened by oestrogen in days 1-14 and by progesterone in days 15-28.

a. The enlargement of the breasts
b. Widening of the hips
c. Increased body fat
d. Growth of public and underarm hair
e. General growth spurt in height

Female infertility is the inability to conceive either by fertilisation failure or implantation failure. Egg cell formation or ovulation may not occur due to a hormone imbalance. The egg cell may not be able pass to the uterus due to blockage of the Fallopian tubes. Treatment with hormones may be successful. In-vitro fertilisation and implantation is often used to treat female infertility.

Fibroids are benign tumours of the uterus. They are slow growing and range in size. Small fibroids produce no symptoms while large ones can cause heavy and prolonged menstrual bleeding. They can also cause pain, miscarriage, or infertility. Some science shows that they may be caused as an abnormal response to oestrogen. Large fibroids are removed by surgery. In severe cases where there are many large fibroids the uterus may have to be removed. This is called a hysterectomy.

Copulation is also called coitus or sexual intercourse. During this process the penis moves into the vagina in order to deposit semen which contains sperm cells. The depositing of the semen is called insemination.

a. After insemination the sperm will move up the Fallopian tubes.
b. If ovulation has occurred and an egg is present the egg will release a chemical that attracts the sperm. This is called chemotaxix.
c. The sperm that reaches the egg will use an enzyme in its acrosomes to make an opening in the membrane of the egg.
d. Once one sperm enters the egg (only the head enters) the egg forms a membrane that prevents other sperm from entering.
e. The nucleus of the egg fuses with the nucleus of the egg. A diploid zygote forms.
f. Fertilisation may take place during days 11-16 of the menstrual cycle.

About 6-9 days after fertilisation the fertilised egg becomes embedded into the lining of the uterus. The zygote has now become an embryo. A membrane called the amnion develops around the ebbryo. This membrane will secrete amnion fluid which surrounds and protects the embryo.

a. After implantation the embryo forms another membrane called the chorion. This surrounds the embryo.
b. Projections of the chorion called villi join with blood vessels in the endometrium to form the placenta.
c. The placenta become fully functional in about 3 months.
d. The umbilical cord connects the embryo (at the navel) with the placenta.

FUNCTIONS OF THE PLACENTA

1. Protection of the Embryo:

Glucose, amino acids, lipids, vitamins and minerals pass to the embryo from the mothers blood.

It secretes a variety of hormones including oestrogen and progesterone. The hormones maintain the pregnancy and prepare the mothers body for birth and lactation.

Metabolic wastes, CO2 and urea, pass from embryo into the mothers blood.

1. The zygote divides many times by cleavage (increase in the number of cells by division but no overall increase in size) to double its cell number. A solid clump of about 100 cells called the morula is formed.

3. The blastocyst is pushed down the fallopian tube and into the uterus for implantation.

In normal development the sperm fertilizes the egg. The cortical reaction occurs raising the fertilization membrane and cell divisions occur until the blastula stage. When the embryo reaches the blastula stage the embryo releases an enzyme that dissolves the fertilization membrane and the young embryo swims free to continue development.

DEVELOPMET OF THE EMBRYO (higher level) 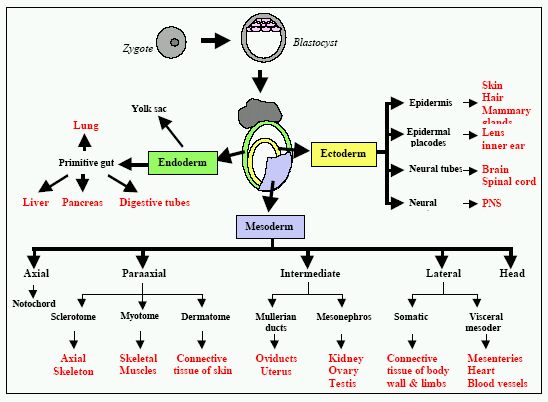 The Gestation period is the length of time from fertilisation to birth. In humans it is generally 266 days (38 weeks/9months).

1. The placenta stops producing progesterone. This causes the walls of the uterus to contract.

2. Oxytocin is produced by the pituitary gland. This hormone causes contractions of the uterine muscle. This is the beginning of labour.

a. Stage 1: The contractions push the foetus down toward the cervix. The membrane around the foetus (amnion) breaks. The amniotic fluid is released through the vagina.

b. Stage 2: The cervix dilates (widens) and the foetus is pushed out through the cervix and vagina. At this time the umbilical cord is cut.

c. Stage 3: The placenta and foetal membrane (afterbirth) are released through the vagina.

Lactation is the secretion of milk by the mammary glands of the mother. Colostrum is a thick yellow fluid produced during the first few days. It is low in fat and sugar but rich in minerals, protein, and antibodies.

Human milk has a lot of advantages for the babys growth and development. Human milk is nutritionally balanced for a developing human baby. It also contains a wide variety of beneficial chemicals that include mothers antibodies. These antibodies protect the child against common pathogens. Human milk also contains chemicals favourable for brain growth and development. Human milk also encourages the growth of mutualistic bacteria in the large intestine.

2. Mechanical contraception:
a. Condom: This is a thin impermeable sheath covering the penis. Semen cannot be deposited in the vagina. 10% failure rate.
b. Vasectomy: The cutting, sealing or tying off the sperm ducts. Sperm will not be in the semen. 0.4% failure.
c. Cervix Barriers: diaphragm or cap These prevent sperm entering the uterus. 15% failure rate.
d. Intrauterine Devices (IUD): These are plastic or metal loops or coils that prevent implantation. 5% failure rate.

3. Chemical contraception:
a. Spermicides: These chemicals are placed in the vagina to kill sperm. 20% failure rate.
b. Oral contraceptive pill: Contain hormones such as progesterone and oestrogen that prevent ovulation as the follicles do not mature. 6% failure rate.

4. Surgical contraception:
a. Tubal ligation: The Fallopian tubes are cut and sealed preventing sperm and egg cells meeting. 0.4% failure rate.
b. Vasectomy: The vas deferens (sperm duct) is cut. Sperm is not present in the semen.
The % failure rate is the number of sexually active females out of a hundred who will become pregnant within a year.

Take a break from studying and play some cards! Read the reviews of the top Texas Holdem poker sites at iTexasHoldem.

Create your own review
Average rating:   1 reviews
Alex
by Alex

Never given a review on a website as long as I live..except now...but I just want to say thank you for these notes....they are really helpful.