Chromosomes are structures located in the nucleus of the cell. They are made of DNA and protein. Chromosomes are long thin threads called chromatin until cell division occurs. Then they become visible as rod-like chromosomes. Chromosomes are composed of genes. All the genes of an organism make up the organism s genome. Genes control the physical characteristics of a species. All organisms of the same species contain the same number of chromosomes in their nuclei. 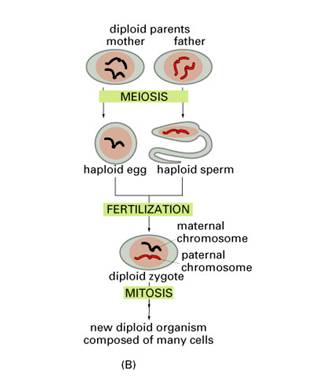 All cells develop from existing cells. This is called cell continuity. Cell continuity enables organisms to grow, replace dead cells, and reproduce. A cells life can be described with the cell cycle. There are three stages of the cell cycle: interphase, division of the nucleus (mitosis or meiosis) and cytokinesis. (Note that there are 3 stages in interphase but you are not responsible for this in your course.)

THE STAGES OF THE CELL CYCLE

This is the part of the cell s life process when it does not divide. In this phase the cell grows, proteins and enzymes are made, and it increases the number of cytoplasmic organelles. Near the end of interphase chromosome duplication occurs. When this occurs the single strand chromosome becomes a double strand. Each strand has identical genes. 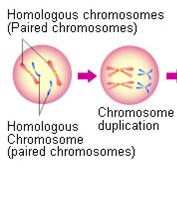 Mitosis is the division of the nucleus. Two daughter nuclei, genetically identical the original nucleus, are formed. The 2 cells formed by mitosis are called daughter cells.

There are four stages of mitosis. They are prophase, metaphase, anaphase, and telophase.

As seen on the diagram below, the chromatin condenses forming chromosomes. Each chromosome is composed of two identical sister chromatids connected at the centromere. At this stage the nucleolus and the nuclear membrane break down and the spindle fibres form.

As seen on the diagram below, the chromosomes line up along the middle of the cell. Each chromosome is connected to both sides of the cell by spindle fibres attached to the centromeres.

As seen on the diagram below, the spindle fibres shorten (contract) and split the pair of chromosomes at the centromeres. The 2 sets of chromosomes are pulled to the opposite sides (poles) of the cell.

As seen on the diagram below, each chromosome group becomes a nucleus when a nuclear membrane is formed around it. The chromosomes uncoil to become chromatin and the nucleolus reforms.

SUMMARY OF THE PHASES OF MITOSIS

This cell is shown, as this is how all cells look before mitosis. Please be aware that Interphase is a phase of the cell cycle, but NOT a stage of mitosis.

Mitosis – Early Prophase
To begin mitosis, the nuclear membrane breaks down, while the chromosomes shorten and thicken (here, a chromosome is two chromatids, bound at a point called the centromere, making an “X” shape). The other structures important for mitosis are also forming (i.e. the centrioles).

Mitosis – Metaphase
The mitotic spindle apparatus has now formed and lies on the poles of the nucleus (but remember, the nuclear membrane has broken down, so there is no distinctly delineated nucleus). The chromosomes are lined up along the cell’s equator, also known as the equatorial plate, and are attached to the mitotic spindle apparatus via microtubules (to try and visualize the microtubules extending from the poles to the chromosomes on the equator, think of the Earth – it’s as if rope was extending from the chilly north and south poles to the chromosomes basking in the sun at the equator). Here’s the confusing part – When the individual chromatids (½ of the “X”) are separated from the chromosome (the “X”), they are now each referred to as a chromosome (i.e. In metaphase, the chromosome, composed of two chromatids, separates into the individual chromatids, which are then renamed chromosomes, even though they were only one half of a chromosome only moments before!) – Whew!

Mitosis – Anaphase
The newly formed chromosomes (which were recently chromatids while they were still ½ of the “X”) are pulled along the microtubules toward opposite poles of the cell (like Monarch butterflies migrating back to Canada and the southern tip of South America (toward the poles) from Mexico (near the equator).

Mitosis – Telophase
The chromosome have finished their migration to the poles and the mitotic structures breakdown. The plasma membrane of the cell pinches down along the equator creating two separate cells (similar to twisting a long balloon and forcing it to pinch in the middle). At this time, the chromosomes become indistinct (as they are during Interphase), the nuclear membrane forms again and the nucleolus reappears.

Cytokinesis results in 2 daughter cells each with identical chromatin. The process differs in animal and plant cells.

Animal cell cytokinesis occurs by a process called cleavage. As seen in the diagram below, a cleavage furrow, appears. This furrow becomes deeper until, eventually, it breaks the 2 halves apart to form 2 daughter cells.

As seen in the diagram below, sacs called vescicles form around the centre of the cell. These sacs contain cellulose which will form a cell plate. 2 new cell walls develop along the middle lamella. The cells then break apart forming 2 daughter cells.

SUMMARY: THE ROLE OF MITOSIS:

The formation of a multicellular organism.
Asexual reproduction in organisms such as amoeba and yeast.
Vegetative reproduction of plants.
Cell replacement and regeneration.
Gamete formation in the flowering plant.
Faithful copying of genes and their transfer to the next generation of nuclei or cells.
Maintains the correct chromosome number in cells.

A human body cell contains 23 pairs of chromosomes. The gametes – sperm or eggs – contain half this number of chromosomes, which is why meiosis is sometimes called ‘reduction division’. (For more on chromosomes go to DNA and genes)

Before meiosis begins, the chromosomes are copied exactly. The DNA of each chromosome is replicated to form two chromatids. They then arrange themselves into homologous pairs (both coding for the same characteristics), and prepare for cell division. At this point maternal and paternal chromatids can exchange bits of DNA to recombine their genetic material and increase the potential for variation.

The homologous pairs of chromosomes then separate and move to the poles of the parent nucleus. For each of the 23 pairs there is a 50-50 chance as to which pole the paternal or maternal pair of chromatids goes. With over 8 million possibilities there are many opportunities for variation.

The nucleus now divides to form two daughter nuclei, each with a mixture of paternal and maternal chromosomes but with half the full complement of genetic material (and no pairs at all). This division is called Meiosis 1.

For meiosis to work, first the chromosomes are doubled, just as they are for mitosis:

Then the cell splits into two, just as it does for mitosis:

But, it does not stop there. With meiosis, there is an additional division in order to split up the information so that each cell has 50%. The animation below shows the second division:

SUMMARY: THE ROLE OF MEIOSIS

Increases genetic variation in the population and, as a result, in evolution
Makes sexual reproduction in plants and animals possible
Gamete formation in animals

It’s really important that you don’t get meiosis and mitosis confused! Take some time to look at the table below and make sure you understand all the differences between the two types of cell division.

Cancer results from cells that divide at an abnormally high rate. As a result a tumour results. Tumours may be either benign or malignant.

Malignant tumours can invade parts of the body and, therefore, damage that part of the body. The movement to other parts is called metastisis.

Benign tumours are not life-threatening. They do not invade other areas of the body and most can be removed.