Viruses are tiny and non-cellular. They are so small 30,000 in single file across one millimetre on average. Viruses are not included in any of the biological kingdoms of life. They are inactive until inside a host organism where they use the host’s cellular organelles to carry out their life functions. Scientists debate on whether viruses are living or non-living. The general consensus is that they are non-living parts nucleic acids (either DNA or RNA) that escaped from other living cells. Eventually they evolved to make a protective cover around the nucleic acid.

The general structure of most viruses is a simple protein, outer coat, called a capsid which encloses nucleic acid (either DNA or RNA). There are genes located on the nucleic acid but there numbers are small compared to complex organisms. 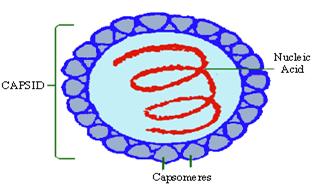 Viruses may be round, rod, or complex in shape.

Viruses are obligate parasites. They can only function by using the energy of their hosts. In order to replicate themselves they must use the structures and energy of the host they have occupied.

The chart below shows the replication of a bacteriophage. This virus infects bacteria. It takes about 30 minutes to complete its replication cycle.

A virus will replicate many times when it invades a host cell. There are 4 stages involved in this process:

This is an animation of the replication process:

Animation of the Lytic Life Cycle of a Bacteriophage:

VARIATIONS IN THE REPLICATION PROCESS

Some viruses are retroviruses. These viruses contain RNA instead of DNA. They also contain and enzyme (called a revetranscriptase) which converts the RNA into DNA. The DNA then makes copies of the original RNA along with new viruses in the host cell. Lysis then occurs. The AIDS is an example of a retrovirus.

Other viruses do not destroy the host’s DNA but joins with it. New cells produced by the host will then contain their original DNA along with the viral DNA. The new cells may then produce harmful substances that will damage the host. Diptheria, scarlet fever, and botulism are examples of this.

MEDICAL AND ECONOMIC IMPACT OF VIRUSES

1. Many diseases are caused by viruses. They include common colds, flu, polio, rabies and many others. Refer to your text for a full list.

2. AIDS: Acquired Immune Deficiency Syndrome is a disorder in which the body can’t make antibodies. This is caused by the retrovirus called the Human Immunodeficiency Virus (HIV).

2a. Transmission of HIV: The HIV virus enters the body in fluids such as blood and semen. The following can cause this to occur:
– sexual intercourse
– infected blood products
– shared needles
– from mother to child across the placenta or in breast milk

2b. Effects of AIDS:
– The virus enters a white blood cell. It can either remain dormant or disable the white blood cell. If it remains dormant the person is said to be HIV positive. This means that the person has the virus but it has not become active.
– Once the virus become active it will disable the helper T-cells. This prevents the person from producing antibodies. The victim is unable to fight off infection. Pneumonia is a common infection of AIDS victims and may cause death.

2c. Control and Prevention of AIDS: There is presently no cure for AIDS. The only means to avoid it is by preventing its transmission. The following methods should be noted:
– Avoid sexual intercourse or confine it to one partner and use a condom.
– Do not use needles. If you do, don’t share them with anyone.
– Do not share toothbrushes or razors.
– Avoid contact with blood. Use surgical gloves if need be.
– AIDS victims should not donate blood, semen, or body organs.

1. The general defence system of the body will defeat many viruses.
2. Vaccinations or the injection of antibodies will produce immunity.
3. Antiviral drugs have been developed.
4. Interferon is a substance produced by virus infected cells to protect healthy cells. It is being produced artificially.
5. Acyclovir is made to treat herpes.
6. AZT slows the development of AIDS.