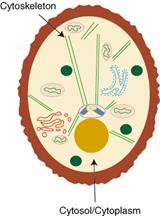 Respiration is the process by which cells convert food in energy. The food from which energy is released is mainly glucose. There are 2 types of respiration: aerobic and anaerobic respiration.

The basic chemical equation for respiration is:

THE STAGES OF RESPIRATION (ordinary level)

There are 2 stages involved in respiration:

Glycolysis takes place in the cytosol. The cytosol is the clear portion of the cytoplasm. Here is where the enzymes needed for stage 1 are located. This process does not need oxygen.

The process of glycolysis functions to split a glucose molecule into two 3-carbon molecules called pyruvic acid (C3H4O3). This releases a small amount of ATP but most of the ATP is still contained in the 3-Carbon molecules.

Stage 2 requires oxygen and takes place in the mitochondia of the cell.

In stage 2 the 3-Carbon molecules (pyruvic acid) breaks apart to form carbon dioxide and water. This releases a great deal of ATP for the cell to use.

A generalised view of respiration:

Two products of anaerobic respiration are lactic acid and alcohol.

Lactic acid is produced in some bacteria, fungi, and muscle tissue.

Alcohol fermentation occurs in some bacteria, yeasts, and in plants deprived of oxygen. Again the pyruvic acid formed by glycolysis is changed. Here it is changed into ethanol ethyl alcohol) and carbondioxide.

Pyruvic Acid is changed into ethanol + small amount of energy

Baking: the carbon dioxide causes the dough to rise

Biotechnology: (See batch processing and continuous flow processing by clicking on the Bacteria Webpage on the Homepage)

Immobilised Cells: Just as enzymes are immobilised for commercial uses bacteria, fungi, and yeasts are also immobilised for production of products. See the enzyme webpage to review immobilisation techniques.