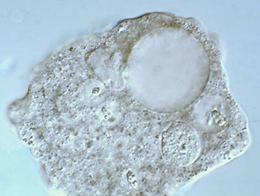 Other everyday examples of diffusion are:

1. Sugar will diffuse through tea until the entire cup of tea is sweet. (We stir the tea to speed up the diffusion.)

2. The odour of food cooking diffuses throughout the kitchen. If you open the kitchen door it will spread into the next room.

The movement of these molecules is said to be passive. No energy is needed to be provided. The natural kinetic energy of the particles supplies the energy.

Examples of diffusion in science are:

2. Oxygen diffusing out of the stomata and lenticels of leaves.

This animation shows the purple molecules diffusing throughout the box:

This animation shows a graduated cylinder. Note how the bromine diffuses throughout the cylinder when the glass plate it removed:

(click the reload or F5 button to view this again)

Here the molecules move out of the liquid and into the air by diffusion:

Osmosis is a special example of diffusion. It is the diffusion of a substance through a semipermeable membrane from a more dilute solution to a more concentrated solution. This process is also passive since no external energy is needed.

Some major examples of osmosis:

Here is an example of particles moving through a plasma membrane:

This animation shows osmosis of particles. Note that when the particles are distributed equally on both sides of the membrane the osmosis stops:

(click the reload or F5 button to view this again)

In another example, the solute can’t fit through the membrane but the water can. The water moves through until both sides’ concentrations are equal:

Here, the concentration is the same on both side of the membrane. The water moves through the membrane from both sides at equal rates:

The movement of liquids in and out cells is dependant on the concentration of the solution surrounding it.

There are 3 types of situations in which this could vary: 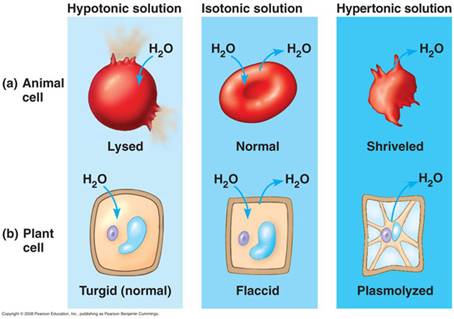 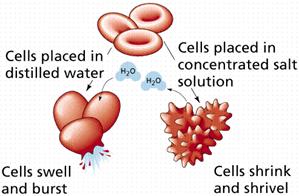 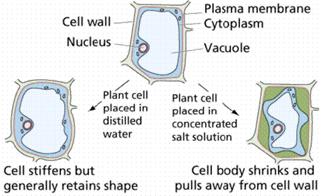 (A) Amoeba, living in freshwater, uses a contractile vacuole to expel the excess water from its cytoplasm. This was discussed in the amoeba web page which can be found on the homepage.

Paramecium, another protest, also gets rid of excess water using a vacuole: 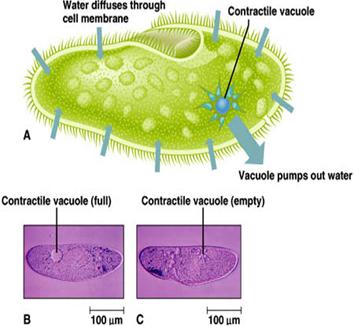 (B) The kidneys maintain the blood at the correct concentration.

Plant cells have a cell wall that allows all materials to enter. It then has a semi-permeable membrane surrounding the cell’s cytoplasm. Plant cells are able to take in water and swell because the cell wall is strong enough to withstand the pressure within the cell. This pressure is called turgor pressure. As a result of turgor pressure the cell becomes firmer and stronger. Plant cells with the correct internal water pressure are said to be turgid. Plants with too little internal water are said to be flaccid.

A good example of this is a plant that is watered compared to a plant that is not watered. The non-watered plant will shrivel and will because it has lost its Turgor pressure.

The loss of water from a plant is called plasmolysis. The cell then become plasmolysed. The cell on the right (below) is plasmolysed. Deplasmolysis is the process by which the cell become turgid by gaining water.

Food can be preserved by causing any microorganism that comes in contact with it to become plasmolused and, therefore, shrivel and die. To do this food is placed in a high salt or sugar medium. The salt or sugar concentration is higher than the cytoplasm of bacteria or fungi. Bacteria or fungi, that contaminate the food, will lose water by osmosis and their metabolism will decline.Many will die but some bacteria may survive by forming dormant resistant endospores. Meat and fish are often preserved in salt. Fruit is commonly preserved in sugar as in jam or syrup.

Get free bets for your favourite Premier League teams at promocodebets.co.uk.